In this part, I will talk about my trip experience between Aberdeen and Penzance where things went from bad to worse and even more worse.

More about my plan for a challenge can be found here: https://dominiksymonowicz.com/2018/07/23/doms-32-hours-on-trains-in-the-uk-challenge/

Table of contents for this report can be found here: https://dominiksymonowicz.com/2018/10/18/doms-32-hours-on-trains-in-the-uk-challenge-report-part-1-introduction/

At Dundee, I was left out by Caledonian sleep staff.

I asked the station staff for help, and they suggest me to stay at the platform until my train from Montrose arrives at 9.30. I was preparing to relax in the quite comfy waiting room, or I could use the Caledonian Sleeper lounge (as suggested by staff on the train). However, while I was exploring trains on the platform I saw a train going to Montrose operated by CrossCountry, and I wondered if this train will be my train from Montrose to Penzance, so I asked train manager to give me a lift 🙂 and he kindly agreed.

This train managed to be late 1 minute on a journey with 2 stops. It turns out to be least delayed train on the whole trip. 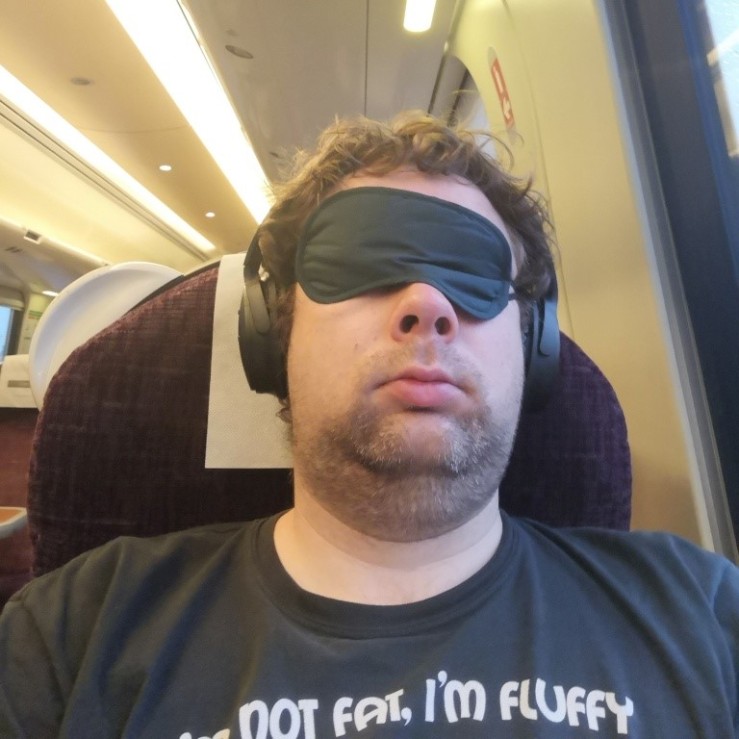 This trip should be from Aberdeen to Penzance and journey should take me around 13 hours and 23 minutes. Let’s start that, this trip didn’t go according to my plan, and in the end, I stay just 15 hours on this train. This time include sitting on the train before the first departure and remain on the train while the train was waiting for a departure from Montrose to Penzance.

Originally I planned to relax on this trip by enjoy the views, drink a bit of wine and do some research for my other project (to explore all tube stations in the London).

The despite trip started at Dundee everything suggests that my journey will go swimmingly until Exter/Plymouth where in worst case scenario I will probably have to change to GWR service to Cornwall and probably change at Truro.

Delays are currently being experienced to all services between Plymouth and Penzance (and vice versa). This is due to a number of weather-related issues, primarily wind-blown debris, on or adjacent to the line. In addition, there is a report of a tree having fallen by the line in the Truro area which will further affect westbound services. Due to predicted storm conditions, no CrossCountry services will operate west of Plymouth on Friday 12th October and Saturday 13th October. Additionally, CrossCountry services between Exeter and Plymouth will not operate until after the morning high tide passes at 11:00, owing to waves predicted to be overtopping the exposed sea wall at Dawlish

I got a coffee and a hot sandwich. It was a quite tasty beacon roll. It is worth mention that it was my last hot meal that day. We got to Montrose where train waits for his epic voyage to Penzance. 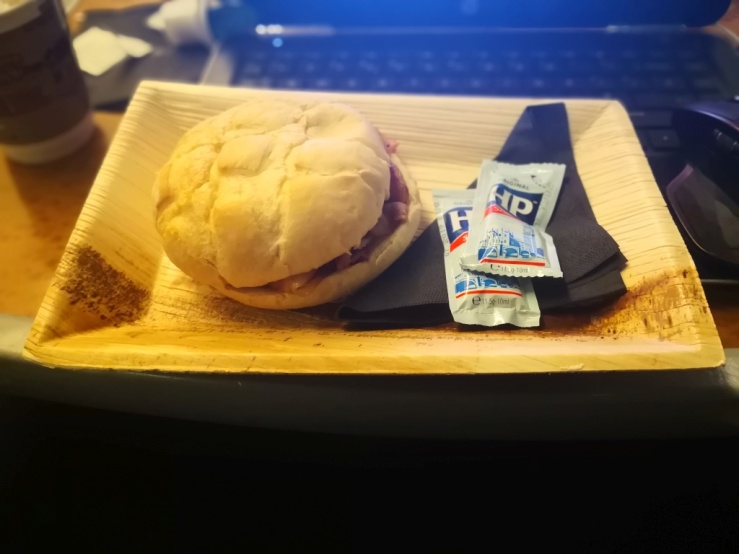 My trip from Montrose starts smoothly and stay like that until Darlington. The first hiccup happens at in Darlington (problem with despatch person) then furthermore in Sheffield. I think it is due with overcrowding on the train. The platform was flooded with people. I was shocked to see how many people tried to get to this train. There are so many people on the platform that my mobile network just died.

Our train also develops an interesting visual effect. Every time when the driver applies breaks some lights in carriage went off. It reminds me old trams in Wroclaw or Bakerloo line in London.

when breaks are applied 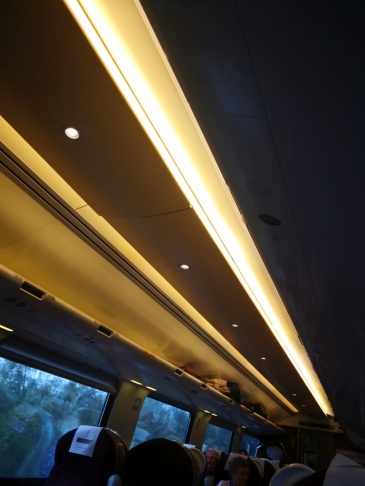 However, in terms updates on the website, there were a few good news that CrossCountry resumed services to Plymouth, and as far as staff was aware this train will actually go to Penzance, but they ask me to ask staff after next stop.

I asked train manager after we left  Birmingham New Street, and she said she doubts that we even get to Bristol as they received news that police investigate possible fatality somewhere, but she said it wasn’t confirmed how it will affect our train. The good news was … it didn’t affect our train, but we got stuck in Bristol due to lack of driver. Our driver was driving another train, and his train will arrive quite late as his train was sent via some diversion caused by another problem.

At some point, train change destination to Plymouth but nobody decided to inform anybody on the train, but then information on the board was even more interesting.

While I enjoy, my ride other passengers were pissed in my carriage (especially these ones who sit in the first class with a ticket for standard class). The toilet in first class was run out of toilet paper (but I have my own .. just in case 🙂 ).

When we arrived at Exeter, then there was a new problem. The line between Exeter and Plymouth were closed due to a problem with the overhead cable. It means we will stay at the platform for at least 70 minutes.  Somehow this news didn’t cheer up people but make them mad.

I asked XC staff about my trip, and they said there is a  GWR staff here so they should be able to get information NightRivera service faster than them. (I tried to figure out this information on the GWR website but it suggested to contact customer service on Twitter. I did, and they advise me to check GWR website, but this service will run as normal, so I didn’t bother to carry on this ping-pong game). When I left to train to seek for staff they were announced that my train is leaving. I need to run to the train (I managed to catch a train from the rear, and my sit was on the front carriage). When I got to my sit, there was an announcement that we need to wait now for another CrossCountry train merge them and go together to Plymouth. *sigh*. 15 minutes later we were on the move.

All lines between Plymouth and Totnes have reopened, following damage to the overhead electric wires between these stations. However, whilst services recover, trains may be cancelled or delayed.

The broken down train at Truro has moved allowing the line towards Penzance to open and trains to run.

Great Western Railway services will run at a reduced speed on routes between Plymouth and Penzance. Extending journey times by up to 20 minutes.

No CrossCountry services will operate west of Plymouth on Friday 12 October and Saturday 13 October. Additionally, CrossCountry services between Exeter and Plymouth will not operate until after the morning high tide passes at 11:00, owing to waves predicted to be over-topping the exposed sea wall at Dawlish.

I wish to eat something … but trolley was stuck somewhere, let’s write about food and drink.

I don’t know how looks normal catering on CrossCountry, but this one was catastrophic as there was almost no food. All customers get sandwich at best. I was lucky to get a warm Becoon roll sandwich. It was quite nice actually. I saw plenty of beacons inside.  As it turns out it may be the only thing I got from normal food. I didn’t count how many coffees I drank, but it was more than 15. They only offer some crips and cookies. I felt I ate a few kilos of crisps and biscuits. My level of sugar and salt never been so high. Even if I want to buy food from a trolley, I couldn’t because trolley was stuck in overcrowded standard class. 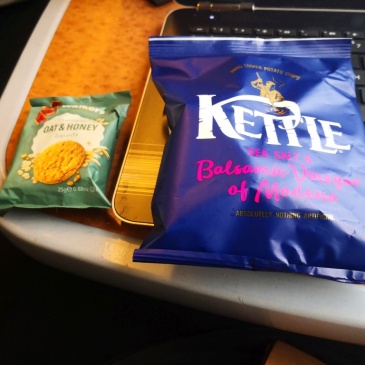 Crisps and cookie (one of 100s i got during this trip) 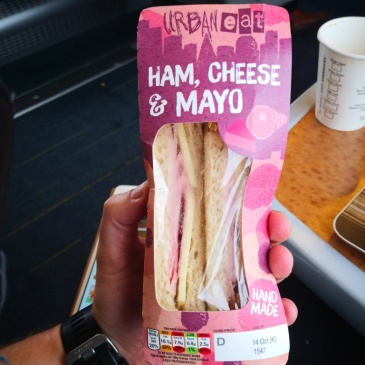 As I mentioned before CrossCountry’s customer service on twitter was fantastic. They were responsive, give useful answers and be honest about things. The same can be told about the staff on the train. They were very helpful and engaging. They may struggle with communicating some stuff but in the chaos caused by many things but they did best. They were much better to compare to Caledonian Sleeper or GWR staff.

Let’s talk about the train.
The train itself was a British Class 220. One of the most disliked train by nerds. Personally, I like it very much because of their big windows, but the seat is not as good as they should be. I wish they install Caledonian Sleeper’s one as sitting on this seat for 15 hours was torture for my ass.

Another thing is these trains need interior refurbishment to make this train cosier.  Lots of nerds moan about the fact that this train is noisy, but it isn’t something that I have noticed as I used noise cancellation headphones. Virgin’s British Class 221 is almost the same, but it feels less shit.

Anyway. Around 21.30. I finally arrived at Plymouth where train terminated. My trip from Aberdeen to Penzance turned out to be from Montrose to Plymouth and took me 15 hours.

It may be surprised to you, but I did enjoy the trip despite I think, it is a great route to take because you can explore various beautiful British landscape. 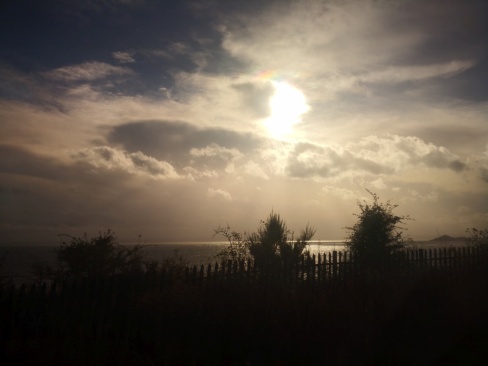 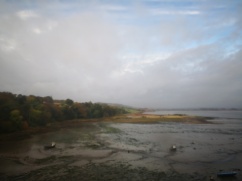 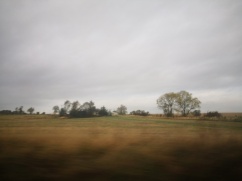 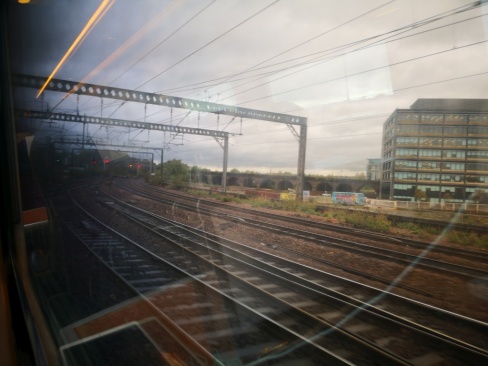 I felt a bit tired after sitting for 15 hours (+ night trip ) but it was time to figure out what to do next as in theory Night Rivera should depart from Penzance in 45 minutes and I am in Plymouth. In the next blog entry, I will talk about events that happen during my last leg of my journey and no, it didn’t go smoothly. https://dominiksymonowicz.com/2018/11/01/doms-32-hours-on-trains-in-the-uk-challenge-part-5-penzance-london-paddington/

Tweets and other noises